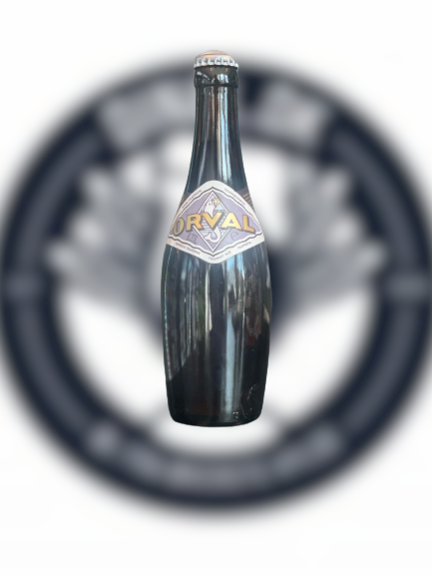 NOTE: The ABV-value of this beer varies, in the United States 6.9% is used.
The Orval’s brewery produces only one beer to sell, a beer with a high fermentation that continues in the bottle. It is 6.2% ABV. This beer is brewed exclusively from spring water, barley malt, hop cones, candy sugar, and yeast. The aroma and the fine taste are due more to the hop cones and the yeast than to the malt that is used.

What’s special about Orval’s beer is that hops are added at two different stages of the production process. First, in the brewing room, a large quantity of very fine hops are added – this produces the famous bitter taste and is the reason why the beer keeps for a longer period of time. Later, in the storage cellars, hops are once again added. This is the so-called British “dry hopping,” which produces the delightful aroma that completely enraptures even the most carefully forewarned taster.

In the tasting room, Orval’s beer and cheese make a really good pair: the unique shape of the bottle and the glass, the design of the label, the coasters and other publicity materials – it’s all a legacy from the early 1930’s.